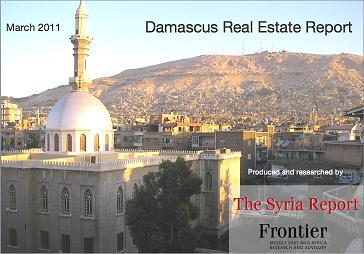 The Damascus Real Estate Report, a survey produced jointly by The Syria Report and Frontier MEA, a UK-based research and advisory firm with wide experience in the real estate and hospitality sectors, provides an overview of the Damascus Residential, Office and Retail segments as of January 2011.

This 82-page document includes data on sale and rental prices, construction costs, a macroeconomic, demographic and legislative overview of Syria and Damascus, a demand and supply analysis, plus profiles of 17 districts and 22 major projects planned or under development in and around Damascus. (see table of contents below)

The report features graphs, charts, maps and tables and provides an analysis of past trends and of future projections. It is a valuable tool both for investors and developers, as well as suppliers, contractors or consultants seeking to gain an introductory understanding of the Damascus real estate market.

This off the shelf report is the first joint effort by The Syria Report and Frontier, and combines the unparalleled market knowledge of The Syria Report with the extensive experience of Frontier in the production of feasibility studies and market research in the real estate and hospitality sectors in the Middle East and North Africa region.

1.10 Role of public sector in economy

1.11 Role of Damascus in economy

1.12 Contribution of real estate to GDP

Chart 4.1, Annual residential licenses issued in Damascus and as proportion of national total, 2003-9

Chart 7.6 Expenditure on land as a proportion of completed buildings in Syria, 2007-2009

Chart 7.7, Total expenditure on materials and wages in Damascus and Rural Damascus, 2007-2009

In early 2011, as the world watched a series of uprisings against regimes that had ruled for decades in Tunisia, Egypt, and Libya, analysts predicted that Syria was unlikely to follow. Despite harsh oppression by the Syrian regime and widespread political grievances, the social and political environment did not seem conducive to a revolution. It was said that Syria’s many minorities were primarily concerned with stability, particularly in the wake of Iraq; the intelligence and military services would stand by the regime and protests could only bring bloodletting; the absence of civil society left no clear alternative to the government; and that Assad himself enjoyed significant support. From the perspective of Damascus or Aleppo, these arguments seemed convincing.

A crucial missing factor was that outside of Syria’s urban centers the population had little to lose. Historically, the agricultural sector provided the backbone of the Syrian economy and farmers comprised a key support base for the socialist Baath Party. But decades of economic and environmental mismanagement left rural Syrians increasingly marginalized. Short-sighted government policies left agriculture economically unsustainable and vulnerable to drought. Land redistribution policies exacerbated economic distress by fragmenting farming land into plots too small to exploit and angered those whose land was expropriated.In the 1990s, Syria began to move away from socialism and liberalize the economy. Inequality rose sharply as subsidies on agricultural and food products were lowered or eliminated. As farmers struggled with higher costs and reduced financial support, Syria was hit by a major drought that wiped out the livelihoods of hundreds of thousands of rural families. Displaced rural Syrians joined hundreds of thousands of Iraqi refugees who had recently settled in Syria’s urban peripheries, forming a swelling disenfranchised population that strained public services and the low-skill labor market.

When protests broke out in Syria, they began in the agricultural region of Daraa and spread first to other farming areas and the city outskirts where displaced farmers had settled. Over the course of the conflict agricultural infrastructure has suffered significant damage. Agricultural production and supply chains have been disrupted. Inputs prices have soared, sanctions have caused input shortages, and flight from violence-affected areas has left agricultural labor scarce and veterinarian services often unavailable. Many farmers have been forced to abandon their livelihoods. Food shortages and price increases have caused a sharp rise in food insecurity in both urban and rural areas.

When Syria begins to reconstruct, there is a risk that funding will be focused on rebuilding urban centers at the expense of the rural population that largely provided the momentum for the uprising. Immediate attention to reconstructing the agricultural sector will be essential to return the country to prior levels of food security, but it will be equally crucial to reassess agricultural policy for the longer term. Particular focus is needed on rural development and structural reforms to create a more environmentally and economically sustainable agricultural sector. As the marginalization and economic distress of rural Syrians was a major contributor to the current conflict, a more stable and prosperous rural Syria will be a key ingredient for sustainable peace and lasting economic and social development.