In late 2021, the local council in Azaz, a city under opposition control in the northern part of the Aleppo Governorate, carried out its first demolition of a “building violation” constructed without a licence. Despite the apparent symbolic nature of the demolition, the council attempted to demonstrate that it is serious about addressing so-called “building violations” and reining in the informal expansion of the city. The council also employed military force in the form of opposition National Army fighters to implement the demolition.

The building violation in question was the construction of a sixth storey on a building in the western part of the city, near the National Hospital. Only the sixth storey of the building was destroyed. The local council stated on its Facebook page on November 30, 2021, that its services office was working to “rehabilitate city infrastructure and preserve public properties, as well as monitor and follow up on construction work in the city and regulate violations.”

Azaz is witnessing a large urban expansion due to its location near the Bab Al-Salameh border crossing with Turkey, which makes it safe from regime airstrikes and artillery fire. In addition, the number of people who have been displaced to Azaz has increased pressure for housing in the city. At the same time, aid organisations that operate in opposition-held areas of northwestern Syria have recently increased their presence in Azaz, opening offices and carrying activities there, all of which has driven up rent. As a result, local real estate and land owners have expanded or constructed new housing to lease. In many such cases, property owners violated building code; for example, they built too many additional storeys or encroached on public or endowment properties.

There are several informally built neighbourhoods on the outskirts of Azaz that do not follow building code because the local council fails to monitor construction. Some buildings in these neighbourhoods encroach on roads and other public properties or sit on sites allocated in the city zoning plans for parks and schools. A city council spokesperson told The Syria Report that some 20 percent of construction in Azaz is now informal. He added that a new zoning plan would be issued soon, after which the city would settle the status of these construction code violations, halt informal construction and regulate existing informal construction.

The first zoning plan for Azaz was issued in 1965 and approved in 1967, with the final amendment in 2000. The new plan is meant to expand the city limits and add land formerly categorised as agricultural in order to accommodate rapid urban growth. The plan may also incorporate the neighbouring town of Sajou into Azaz, in addition to a handful of other nearby villages.

An Azaz city council official told The Syria Report that recent urban expansion has led to rising prices for land in the city’s outskirts and has surpassed the city limits as outlined in the old zoning plan. Such growth has also chipped away at agricultural areas surrounding Azaz and led to the construction of informal neighbourhoods on lands located both within and outside the city’s administative borders. According to the official, the city council in 2021 began to regulate construction, remove buildings that violate construction codes and halt the spread of informal neighbourhoods for the first time since opposition forces captured Azaz in 2012.

Over the past near-decade of opposition rule, the local council has been unable to prevent or remove buildings that violate the building code. Many of the so-called “building violations” are attributed to several  influential armed faction members who became investors in the real estate trade that sprung up on endowment lands and public properties. 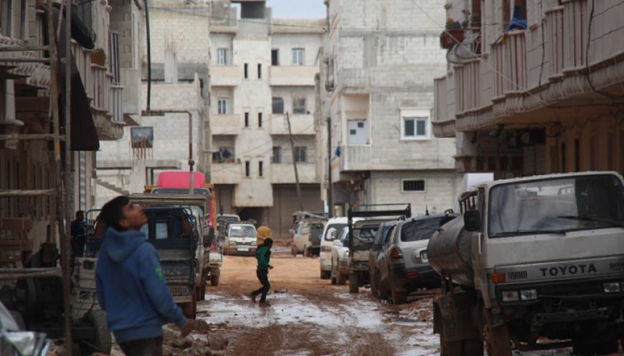