On April 15, pro-regime newspaper Al-Watan reported that the Syrian Democratic Forces (SDF) had taken over a building complex in the majority-Arab Al-Ghweiran neighbourhood in the southern part of the city of Hassakeh. The newspaper accused the SDF of expelling residents of the building complex so that they could expand a nearby US military base.

An SDF commander told a correspondent for The Syria Report that the families of police officers lived there before 2011. After 2011, they were converted into housing for families of regime forces’ officers and soldiers, as well as the families of fighters in the pro-regime National Defence Forces militia.

The building complex belongs toyouth housing, one of the government’s social housing programs run by the Ministry of Public Works and Housing’s General Housing Establishment (GHE). The Syria Report was unable to confirm whether the youth housing complex was used to house families of police officers before 2011. Police and their families are meant to receive another kind of social housing program implemented by the Ministry of Defence’s Military Housing Establishment (MHE).

The SDF commander, who requested anonymity, added that the SDF had vacated the youth housing complex, which consists of 10 buildings, for “security reasons”. He said that the evacuation order was issued after it was confirmed that someone had been able to photograph the US military base from one of the buildings. He did not deny that the SDF had evacuated the residents by force.

At the time of publication, SDF spokesperson Farhad Al-Shami has not provided The Syria Report with an official response to its correspondent’s questions.

The commander who spoke with The Syria Report, said the youth housing buildings in Al-Ghweiran had come under SDF control, but denied they would be handed over to the US military. Arrangements were currently being made to hand the housing units over to displaced Kurdish families from Ras Al-Ayn, Tal Abyad and Afrin, who fled their hometowns as a result of Turkish-backed opposition military activities, the commander added. Those displaced Kurdish families are currently living in shelter centres in Hassakeh, he said.

The Syrian government has accused the SDF of working towards demographic change in the city of Hassakeh by driving out Arab residents. Syrian state-run media have also claimed that the SDF is carrying out American orders. The SDF commander denied these accusations, saying that the reason for the youth housing evacuation was “purely security”. For its part, the SDF accuses Turkish-backed opposition factions of carrying out demographic change in formerly Kurdish-majority areas such as Afrin and Ras Al-Ayn.

According to citizen journalists in Hassakeh, the SDF had recently vacated all housing meant for regime military families in the city of Hassakeh. This includes the youth housing complex in the Al-Ghweiran neighbourhood, as well as the Tal Hajar area and the area surrounding the municipal sports stadium. The Syria Report’s correspondent added that some of the vacated housing complexes had been leased to other civilians, stressing that none of those who had been evacuated were compensated. Some of the displaced families from Ras Al-Ayn had been transferred to these evacuated homes, while work was underway to prepare and restore other remaining homes.

The correspondent added that in mid-2020, the SDF took over a series of government buildings in Hassakeh city: the Syrian General Administration for Gran in the Al-Ghweiran neighbourhood; the Hassakeh General Electricity Company; the Sports City; the Syrian Computer Society; the Directorate of Industry, Tourism and Environmental Affairs; the Civil Registry Directorate and the Commercial Bank of Syria. 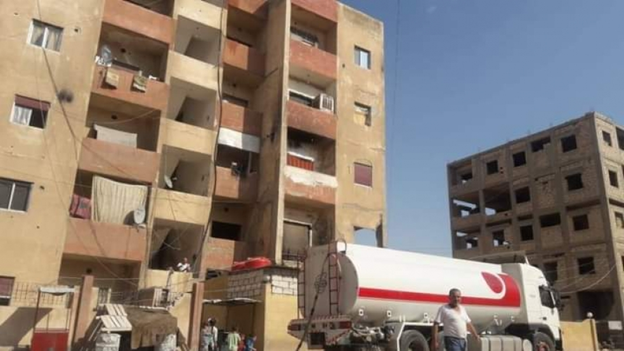