Non-governmental organisations are coordinating with local councils in opposition-controlled areas of northwestern Syria to transport displacement camp residents to housing units newly constructed on state property or private property that was bought to serve as shelter.

In January, a group called Molham Team launched a fundraising campaign called “Until the Last Tent” aimed at moving 500 families from displacement camps scattered along the Syrian-Turkish border into alternative housing units. The organisation, which claims to aid displaced Syrian children and child refugees in dangerous areas, managed to raise USD 1 million in donations.

So far, Molham Team has transported 100 families whose tents were damaged in the recent winter storms to ready-made homes. The organisation says it expects to house additional families throughout February. The housing units are located just outside the city of Azaz, north of Aleppo; Molham Team supervised their construction, which was supported by financial donations.

There are more than one million displaced people in northwestern Syria, spread across approximately 1,300 camps, some of which were informally constructed. Work began in 2016 to build residential villages containing alternative housing for the displaced. Initially, such projects focused on widows, orphans and their families, but expanded after 2018 to target various other groups. The pace of construction has increased in recent years, as the residential villages become widespread.

According to Molham Team, the cost for a 55-square-metre, two-room housing unit is around USD 4,000. Molham Team has ownership of the land which it purchased using donated funds, and possesses a “green tabu” document proving ownership. It then converted the land into endowment properties. Syrian law classifies endowment properties as having a special nature: they are neither state nor individually owned properties, although most were originally owned and then donated by individuals. Endowment properties can include mosques, convents, schools, libraries, cemeteries, and shrines.

This classification means that residents may utilise the endowment without paying a fee or rent. However, residents may not sell or lease their housing units.

Other aid organisations have conducted campaigns similar to Molham Team’s, transporting displaced families from tent encampments to villages and housing complexes in Afrin, Jarablus, Azaz and Al-Rai in the rural part of the Aleppo governorate, as well as Deir Hassan, Atmeh and Harem in the rural part of the Idlib governorate. Displaced people need the new shelter after their tents were damaged and camps flooded by heavy rains. Construction continues in the new housing complexes along the border strip.

Asked about the ownership of the land on which alternative housing is constructed in similar projects, a local council source near Afrin explained to The Syria Report that the council usually provides the land on which aid organisations wish to build housing units. The land is typically state-owned property that the aid organisation may not obtain ownership of–that is, the local council is the actual owner of the land.

On ownership of the housing units themselves, the local council source said that residents have the usufruct right of the homes during the period of their residence. They are not entitled to own or bequeath the units. The local council is charged with supervising the transport of displaced families and distributing the units to them.

The same usually applies for other opposition-held areas in rural Aleppo governorate. In Idilb, which is mostly controlled by Hayat Tahrir Al-Sham, a hardline Islamist group, the Syrian Salvation Government (SSG)-affiliated Directorate of Humanitarian Affairs and Displaced determines which land can be used for the housing unit complexes. These lands are generally also state-owned properties or endowment lands. 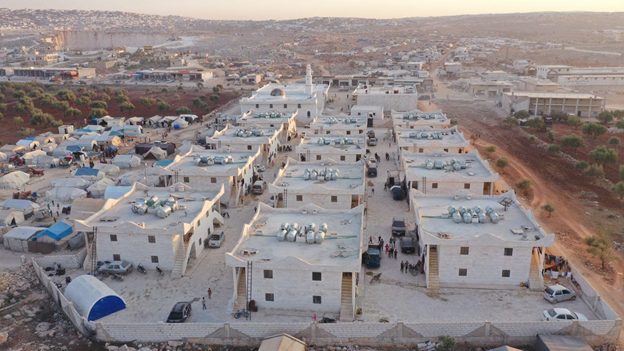