Throughout June and July, the government-run General Secretariat of the Idlib governorate offered rural farmlands owned by absentees and forcibly displaced residents for auction.

The recent auctions, an imitation of similar auctions regularly organised by the Hama governorate since four years ago, are the first to be held by the Idlib governorate, and included lands cultivated with pistachios. The lands offered this summer included farms in all regime-held parts of Idlib governorate, except for the towns of Al-Ghadfeh, Maarshourein and Maasran, which the regime still administers as closed military zones. Notably, the recent auctions also included pistachio farms in the Al-Tamanaeh district, which belongs administratively to the Idlib governorate, though the Hama governorate had been in charge of auctioning lands there in previous auctions.

Opposition forces took control of the entire Idlib governorate in 2015 but were forced out of the governorate’s southern and eastern countryside by regime military advances in 2019 and 2020. At the time, regime forces managed to regain control of Khan Sheikhoun, Maaret Al-Numan and Saraqeb. Most owners of the lands recently offered for investment in the auctions were forcibly displaced by the fighting to areas that remain under opposition control.

On May 31, 2022, the General Secretariat of the Idlib governorate issued Announcement No. 580, identifying the dozens of towns and cities in rural Idlib where farmlands would become available for investment through the auctions. The secretariat announced 12 dates for the public auctions, all of which would be held in the first half of June 2022 inside a tent erected in the “temporary” Idlib governorate capital of Khan Sheikhoun. Damascus has governed Khan Sheikhoun as the Idlib governorate’s provisional administrative centre since late 2021.

The May 31 announcement specified that the investment period for the auctioned lands would last for one agricultural season. The initial deposit values would be SYP 700,000 per hectare of land, with the final deposits at ten percent of the “referral” value – that is, the initial offering price of the auctioned land. According to the announcement, each potential investor interested in participating in the auctions was required to pay SYP 35,000 to obtain the technical book of conditions from the General Secretariat’s Department of Contracts and to submit one application per real estate area for which they hoped to place a bid.

Following the first round of auctions in June, the General Secretariat organised a new auction for July 16. However, either nobody applied for the new auction or the winners of the previous auctions failed to pay their financial dues. In any case, the General Secretariat demanded that all the new auction winners pay their dues by July 20. Failure to pay would result in the cancellation of the auction results and additional fees to help cover the costs of any future auctions.

The General Secretariat set July 19 as the date to start harvesting the year’s pistachio crop in all parts of the rural parts of the Idlib governorate that are under regime control – whether those lands are under investment from their actual owners or from public auction winners. In either case, the secretariat required farmers to obtain “crop harvest papers” from the governorate’s Directorate of Public and Legal Affairs. Such papers are granted only after applicants obtain clearances from the General Secretariat proving that they have met all their financial obligations for the farmlands.

Ostensibly, preference in the auctions was given to relatives of the farmland owners up to the fourth degree. The General Secretariat required relatives to submit applications in order to participate in the auctions, as well as pay the initial securities for any lands they won and invest in the lands at the final prices at which they were awarded. Amid these requirements, it is unclear what form of preference the landowners’ relatives actually received.

The recent auctions in Idlib bear similarities to those held in recent years in the Hama governorate. Both sets of auctions were based on Public Contracts Law No. 51 of 2004, which addresses contracts related to assets owned by public entities, and on Ministry of Agriculture and Agrarian Reform Circulars No. 169 of June 2021 and No. 438 of April 2022. The circulars referred to the conditions for applying to the auctions as well as the deposits that successful bidders must pay.

Until recently, regime forces had worked to harvest pistachio crops from all the lands they control in the Idlib governorate, without landowners’ consent and without compensating them. Back then, the regime considered the Idlib countryside a closed military zone and forbade civilians from entering unless they had prior security approval.

Pistachios are among the most important crops to Idlib’s economy. Cultivation is mainly concentrated around Khan Sheikhoun and Maaret Al-Numan. According to statistics from the Idlib Directorate of Agriculture, some 10,475 hectares of land in the governorate were cultivated with pistachios in 2013. 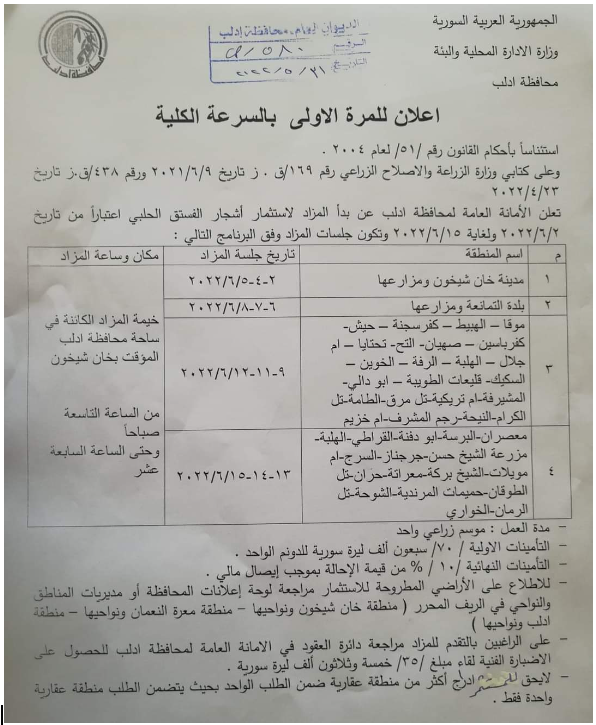