More than two years after some residents returned to the formerly embattled East Ghouta town of Harran Al-Awamid, many still suffer from regime forces’ takeover of some homes, and are barred from rebuilding many of their properties, whether partially or completely destroyed in the war.

Harran Al-Awamid is revered as the birthplace of Mamluk-era Islamic scholar Ibn Taymiyyah. One of the town’s mosques bears his name.

Opposition forces briefly took control of Harran Al-Awamid in 2012, before the regime recaptured it in February 2012 as part of a preemptive military campaign to prevent rebels from advancing on the Damascus airport. From there, regime forces captured a number of other nearby towns to further isolate opposition-held East Ghouta, later imposing a siege.

Since 2013, regime forces have taken stock of the homes and properties of pro-opposition residents of Harran Al-Awamid. They detonated a number of them and, as a result, caused damage to surrounding properties. Regime forces also demolished the area of the town adjacent to the Damascus International Airport, as well as the eastern sector and town centre, later excavating artefacts from the historic Hayat Ibn Qais Al-Herrani Mosque and the area surrounding the ancient columns for which Harran Al-Awamid was named (“columns” is “awamid” in Arabic).

Regime forces built new streets through the town to facilitate movement of military vehicles, and set up mounds in front of its military and security headquarters using the rubble of destroyed homes. The demolitions spared a number of important sites, which were occupied as military headquarters by regime forces and Shia militias that held East Ghouta under siege.

From 2013 until 2018, when the whole of East Ghouta was recaptured from rebels, Harran Al-Awamid remained a military zone, with displaced residents barred from returning. After the recapture of East Ghouta, when opposition members were relocated to rebel-held northern Syria, some residents who had been displaced to regime-held areas in 2013 were allowed to return. About 700 families came back to the town, while 400 were displaced to northern Syria.

Before allowing residents to return to Harran Al-Awamid, regime forces vacated some military facilities in the town, while officers responsible for 15 checkpoints within the town refused to vacate the houses they control adjacent to the checkpoints. Some residents loyal to the regime seized a number or properties along the main street that had evaded destruction, and then subsequently rehabilitated and invested in them.

Regime army officers seized large areas of farmland owned by people seen as pro-opposition, subsequently cultivating and investing in it—especially lands located between Harran Al-Awamid and the Tishreen Power Station. The names of many of the town’s residents were included on lists issued by the “terrorism courts” in order to confiscate their properties.

The Ministry of Industry’s director for Damascus Countryside told the pro-regime Al-Thawra newspaper in January 2020 that there was a push by the Ministry of Industry to establish an industrial zone in the town. He did not detail how the necessary land for such a project might be expropriated. 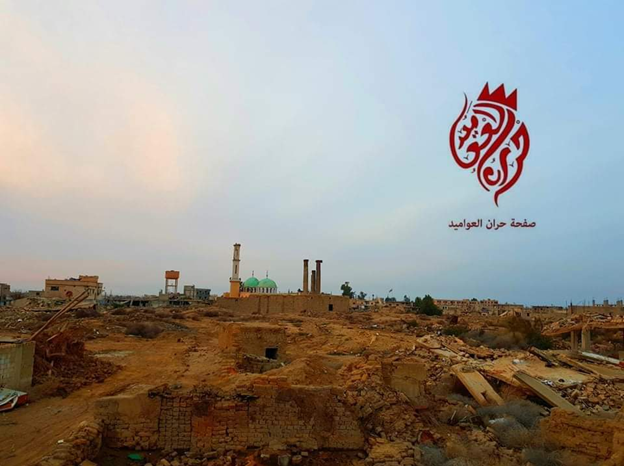