Hama governorate is carrying out a major demolition campaign against what it calls “building violations” in various parts of Hama city. The campaign has targeted housing, warehouses, and factories whose rubble was seized while the owners of the properties were transferred to the judiciary.

The demolitions have taken place in several neighbourhoods, most significantly in Al-Naqarneh, Kazou, Wadi Al-Joz and Mazraa Al-Dhahiyeh under directions from Hama Governor Mohammad Krishani, who personally supervised the demolitions in Al-Naqarneh. Krishani justified the demolitions to pro-government newspaper Al-Watan on November 30 by saying that the targeted buildings in Al-Naqarneh “belong to traders who deal in buildings that are in violation of code on a large scale, and do not belong to impoverished residents”. He emphasised the organised nature of the demolitions, which are supported by the police command and the Central Demolitions Committee, which was formed under Decree No. 59 for 2008 and focuses on informal housing.

Krishani added that 14 factories that served “traders of informal buildings” in Al-Naqarneh were sealed with red wax and seized. He stressed: “Al-Naqarneh is a green area where construction is banned,” and that “after today, violations are completely banned in Hama; any violation of Decree No. 40 of 2012 will be dealt with according to its stipulations”.

Legislative Decree No. 40 of 2012 focuses on building violations. It stipulates the removal of violating buildings, starting from the date of the decree’s issuance, and “whatever the [building’s] type and location, imposes fines and imprisonment against all those proven responsible for the violation, including administrative workers who have neglected their duty to prevent the violation”.

Al-Naqarneh was first built as a makeshift neighbourhood on what used to be agricultural land just south of Hama city that was expropriated for the municipal council in 1983. The expropriation was carried out in accordance with Presidential Decree No. 880 of 1983, which in turn was based on Expropriations Decree No. 60 of 1979.

The neighbourhood covers 500 hectares of land, part of which underwent a study by the governorate to be converted into a real estate development area. The governorate requested that the Ministry of Public Works and Housing approve the inclusion of the area into the city’s zoning plans to prepare detailed plans for it and determine which part would be appropriate as a real estate development zone.

In 2008, the Hama City Council announced the zoning plans for the expropriated lands in Al-Naqarneh, granting construction licences to housing cooperatives to build 1,724 housing units within an area of 104 hectares. But in September 2018, the governorate decided to demolish the entire neighbourhood, including buildings built by the housing cooperatives, claiming that they were against code. The demolitions continued for an entire week. Owners of the expropriated properties were promised alternative housing through the housing cooperatives once construction was complete, but this has not yet come to fruition.

Al-Naqarneh is not the only district to face demolition in recent years. The governorate demolished the informal Wadi Al-Joz neighbourhood in September 2013, displacing 25,000 people. Wadi Al-Joz was one of the largest informally built neighbourhoods in Hama before it was demolished by the governorate following the withdrawal of opposition forces. The General Housing Establishment (GHE) was assigned to expropriate properties in the neighbourhood on an urgent basis in 2013, due to the many building violations there and on the pretext of the massive destruction inflicted on the neighbourhood during the war. The expropriation was aimed at later constructing residential towers and imposing a new zoning plan for Wadi Al-Joz in accordance with Legislative Decree No. 5 for 1982 and its amendments. No compensation was paid for residents whose properties were expropriated. With an area of 30 hectares, the neighbourhood was added to the list of real estate development areas, according to Prime Minister’s Decree No. 2318, passed in August 2014.

The Hama governorate also demolished the informal Al-Arbaeen neighbourhood in September 2012. Mashaa Al-Arbaeen is located in north-eastern Hama city, and was home to 30,000 people. Human Rights Watch estimated its area to extend over 40 hectares, adding that political and military motives were behind the demolition, in contrast to statements made by Syrian officials, who said that the demolition was part of multiple organisational and development projects.

For years, the demolitions have dominated news on the Hama City Council, which justifies the campaigns as fights against building code violations. In April 2020, 59 buildings were demolished in Al-Naqarneh, the Abi Al-Fadaa suburb, the Al-Arbaeen Roundabout, the informal Al-Muamalat area, the Aleppo Highway Roundabout, and the entrance of Al-Dhaheriyeh. Owners of the targeted properties were transferred to the judiciary, according to statements made by officials. August 2020 saw the governorate announce the demolition of eight more buildings in a number of areas, including Al-Naqarneh and the Abi Al-Fadaa suburb. 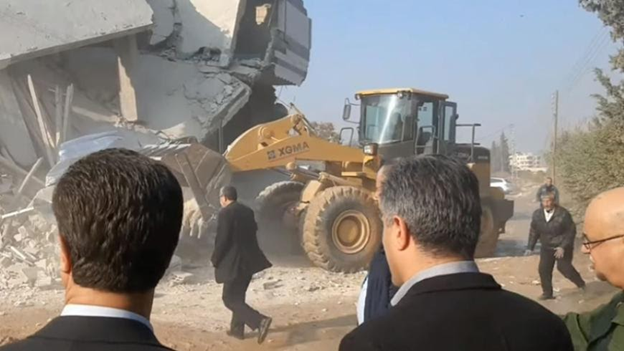