The opposition-affiliated city council for Al-Bab in northern Aleppo governorate announced on November 9 that a committee tasked with surveying properties in the city’s Jabal Aqeil district would soon finish its work. The council called on real estate and landowners in the district to review the survey by no later than December 9 in case they have objections.

Jabal Aqeil, which overlooks Al-Bab, has been considered a military zone since opposition and Turkish forces carried out the “Euphrates Shield” operation in 2017 to expel Islamic State fighters from the area. The Turkish army then established one of its largest military bases in rural Aleppo on Jabal Aqeil, which has prevented displaced residents from returning to the area.

Residents protested the district’s conversion into a military zone in 2017, accusing the Turkish army of demolishing their homes and preventing their return. Protesters demanded that the Turkish army compensate them or find alternative housing for them and their families.

Jabal Aqeil faced massive destruction as various armed forces fought over its control. From 2012 to 2014, the opposition controlled the area, which faced continuous artillery fire and barrel bombing by regime forces. IS seized control in 2014, setting up a centralised operations room. The group also converted the National Hospital there into an ammunition depot and built tunnels and engineering fortifications on the slopes of Jabal Aqeil’s hill. The area faced concentrated aerial bombardment from Russian forces while under IS control, which lasted until 2017. During the Euphrates Shield operation, Turkish forces focused on bombing Jabal Aqeil because it contained IS’ most complex fortifications in the area, and because control of the area meant control of Al-Bab.

Land and real estate in Jabal Aqeil are split between private ownership and public ownership, the latter of which is affiliated now with the Al-Bab Directorate of Endowments, itself part of the city council. Between 2005 and 2010, the district saw an expansion of construction, which spilled onto lands owned by the Syrian government’s Directorate of Endowments, which turned a blind eye in exchange for an annual rental fee. At the time, the directorate was affiliated with the Syrian government’s Ministry of Endowments.

The district presents a dilemma, given the widespread destruction it has suffered, the lack of official documents and maps, and the fact that the Turkish army is preventing residents from returning, as the borders between private and public properties have been lost. The committee set up by Al-Bab’s city council drew up a preliminary plan for Jabal Aqeil on the basis of re-distributing properties to all owners, and determining which properties belong to the Directorate of Endowments. In most cases, Jabal Aqeil residents will be allowed to return and restore their properties. However, the city council has refused to comment on future plans, indicating that the committee’s task was limited to determining property ownership.

Part of Jabal Aqeil, visible from the rural Aleppo governorate city of Al-Bab. 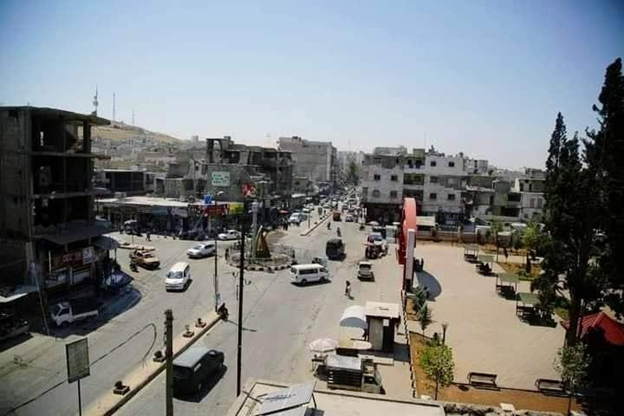